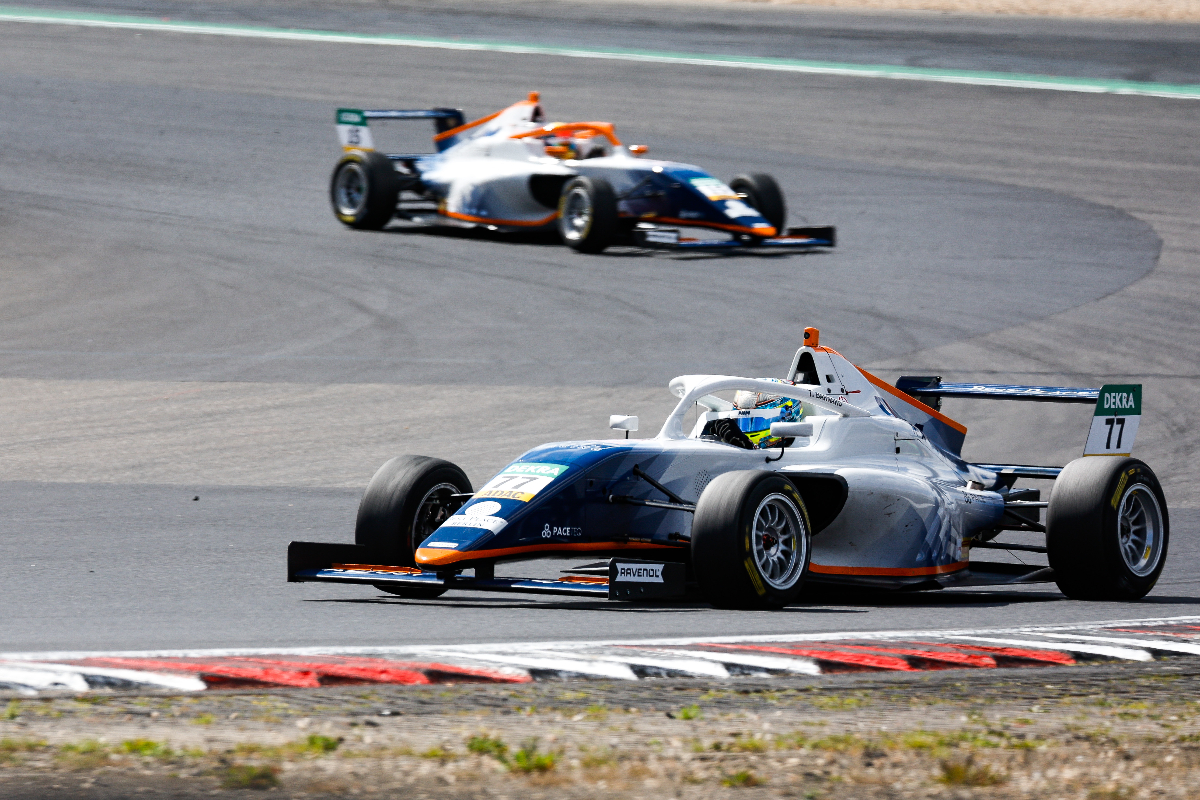 Taylor Barnard came from eighth on the reversed grid to win the final ADAC Formula 4 race at the Lausitzring.

Sauber karter Zachary David and Nandhavud Bhirombhakdi shared the front row, with Rasmus Joutsimies starting third but passing both on the opening lap to lead.

He built up a lead of 1.5 seconds as PHM Racing duo Barnard and Bedrin made their way up the order. Barnard passed his team-mate on lap two, and cleared fellow PHM driver Valentin Kluss on the next lap when Kluss made an odd lunge on David for second place and ended up almost sending himself off at turn one.

Bhirombhakdi meanwhile did get past David, who then put up a good defence against Barnard until the latter made a late-braking move at the turn eight hairpin. Bedrin passed David on the lap after but couldn’t quite match his team-mate’s progress as Barnard then cleared Bhirombhakdi for second to keep a car between himself and his pursuer.

Again, once Bedrin did come to attack Bhirombhakdi it was as Barnard was taking the lead from Joutsimies. There was a gap of only 1.1s once Bedrin get make his way into second and that reduced in the remaining laps.

With two laps to go Bedrin locked up into turn eight as he attempted to make a pass, and Barnard sternly covered the inside down the pit straight as they then started the final lap. The pair played chicken into the turn one braking zone and although Bedrin briefly got his nose ahead it was Barnard who held position on the inside line.

That left little opportunity for Bedrin to then make a move, but he still tried at turn 10 and they avoided contact. Barnard won, and Kluss made it a PHM podium lockout in a similarly thrilling last-lap fight.

He had hunted down Joutsimies, who put up the defences to hold on to third. On one occassion he squeezed Kluss to the pitwall, then on the final lap Kluss passed him with two corners to go. Joutsimies used the slipstream to meet the chequered flag just 0.003s ahead, but a penalty for changing direction more than once dropped him back behind Kluss.

David got back by Bhirombhakdi for fifth, while Jonas Ried held up a queue of cars in seventh. They squabbled behind him and it was Kacper Sztuka who finished eighth after several errors by Michael Sauter when passing, then Ruiqi Liu scored the last point as an attempted pass on Samir Ben left Bin spinning. An issue on the grid for Liu also led to a second formation lap occurring.