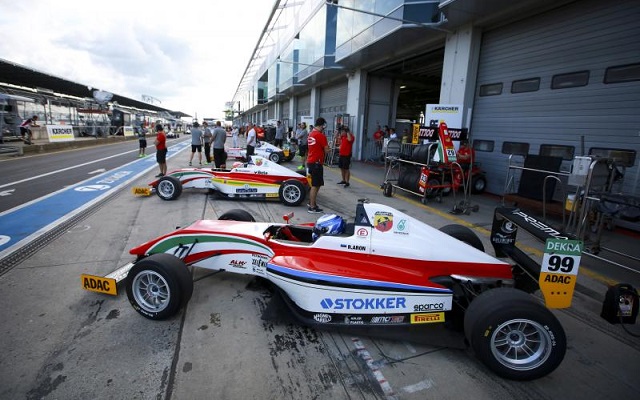 Ralf Aron dominated?the final ADAC F4 race at the Nurburgring to take his first victory in the championship.

The Estonian excelled in the slightly wet conditions and took the lead after a few of laps, rapidly disappearing into the distance right afterwards.

The race started under safety car and went green two laps later, which saw pole-sitter?Tim Zimmermann pull away from Mick Schumacher, who looked less confident on the slippery track.

Soon he?was passed by Joseph Mawson and Joel Eriksson but stuck with them when the safety car made an appearance.

Marilyn Niederhauser spun on the final corner and her car, stuck on the kerbs, had to be cleared.

While Zimmermann stayed ahead on the restart,?Mawson dropped positions due to a bad exit out of the final corner and was only fifth next time around.

Eriksson stayed close to Zimmermann but was unable to make a move and the duo were soon reeled in by threedrivers, led by Aron.

The Estonian easily muscled his way past both and finished with a lead of three seconds over Lando Norris, who himself took a confident runner-up finish.

Following two victories, new points leader Marvin Dienst completed a near-perfect weekend in third ahead of HTP teammate Janneau Esmeijer, who made a last-lap overtake on Eriksson to claim fourth.

Robert Shwartzman also got past Eriksson in the end as the Swede had to settle for sixth. Mawson, also in contention to take fourth during the final laps, finished seventh, followed by David Beckmann.

The top ten was completed by the dropping Zimmermann and Schumacher.