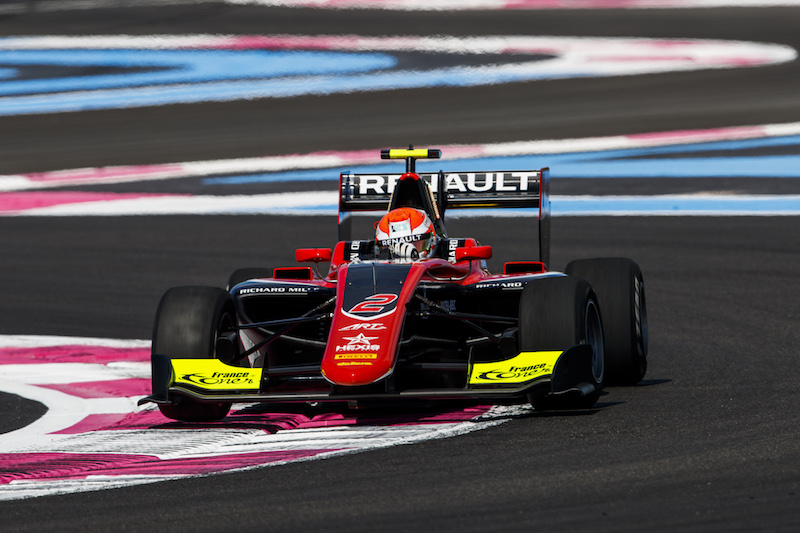 GP3 Series leader Anthoine Hubert topped the timesheet in practice for the second round of the 2018 season at Paul Ricard, as ART Grand Prix locked-out the top four.

Renault-affiliated Frenchman Hubert vaulted to the top of the timesheet with 15 minutes of the 45-minute practice session remaining, and held a 0.2-second advantage over team-mate Jake Hughes.

Hughes later reduced his personal best to draw to within a tenth of Hubert’s time, recording a session-best time in sector one before losing significant time in the last sector.

In the final minutes of the session, Hubert lowered the benchmark by over four tenths. His 1m51.091s featured a session-best middle sector.

Hughes was unable to respond, ending up 0.449s adrift in second place.

ART’s lock-out of the top four positions on the timesheet was completed by Barcelona race one winner Nikita Mazepin in third and Callum Illot in fourth. Both drivers finished within a tenth of Hughes.

In fifth place was MP Motorsport’s Dorian Boccolacci. He had topped the timesheet in the opening stages before being deposed by the ART drivers.

After being shuffled outside the top 10, Boccolacci improved dramatically on his final lap of the session, recording three personal best sectors to vault up the timesheet.

Niko Kari and Pedro Piquet were both demoted several places in the closing minutes of the session. Kari ended up in ninth while Piquet – who ended the session with the fastest time in the final sector – rounded out the top 10.

Christian Lundgaard finished his first session in a GP3 car in 11th. The Renault Sport Academy driver is currently sitting second in the Formula Renault Eurocup championship and has been drafted into the MP Motorsport GP3 line-up this weekend in place of Will Palmer.

Both Gabriel Aubry and Juan Manuel Correa stopped on track during the session. They finished 18th and 20th respectively after their limited running, separated by Alessio Lorandi, whose session was hampered by rear wing damage.