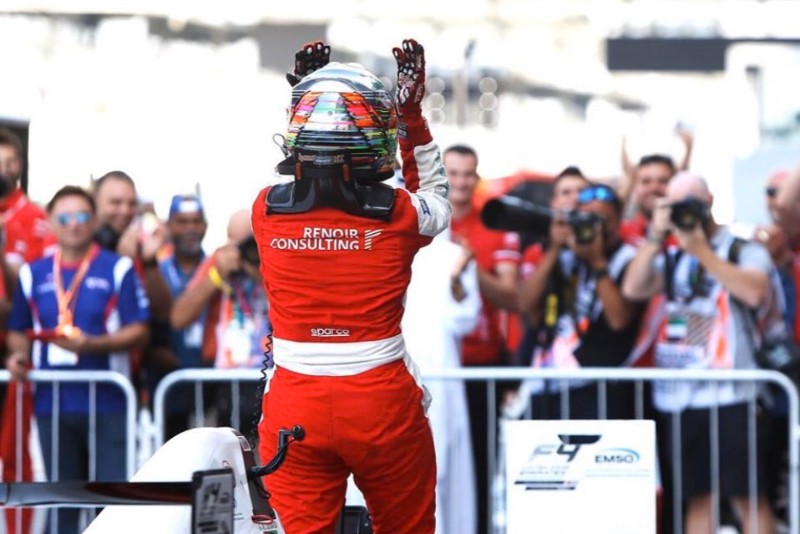 Abu Dhabi Racing’s Amna Al Qubaisi, who has raced without success in Italian F4 for the last two years, claimed pole for the first non-championship race and then became the first Arab woman to win a FIA single-seater race.

She held off Xcel Motorsport’s Nicola Marinangeli during the first laps of the race, then pulled away to win with a gap of over 3.5 seconds.

Unfortunately, the pair were both taken out of contention during the opening lap of race two after an attempted overtake from Al Qubaisi led to contact and damaged her right-rear wheel. Marinangeli continued on but retired on lap seven of 11.

Marinangeli’s team-mate and British F4 regular Alex Connor – who completed the race one podium in third – benefited to take the lead, then held on for his first single-seater win ahead of Dragon Racing debutant Manaf Hijjawi and Xcel’s Tijmen van der Helm.

Mucke Motorsport’s Nico Gohler had a strong run on his UAE return, finishing the two races in sixth and fourth.

Four women competed in the non-championship round. Al Qubaisi’s sister Hamda had the highest-placed finish out of the other three competitors after she came home fifth in race one, while like Amna damage to her car meant she could only finish 11th in race two.

Saudi Arabia’s Reema Juffali was able to hold off Xcel duo Ivan Peklin and Mehrbod Shameli to take sixth in the second race. She had initially started off the weekend finishing one lap down in 12th.