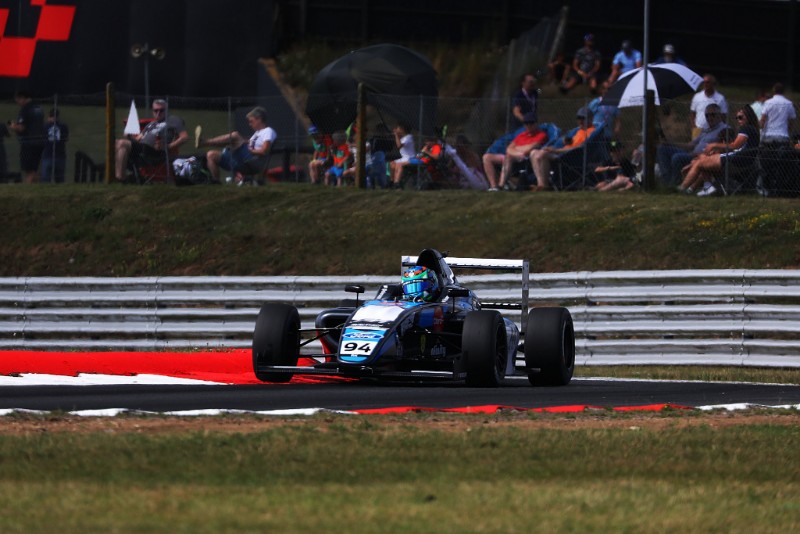 Sebastien Alvarez claimed his second British Formula 4 victory at Snetterton, as he relaunched his title challenge.

The Double R Racing driver made a clean getaway and had a gap of almost a second by the end of the opening lap as JHR Developments’ Carter William’s and Carlin’s Zane Maloney battled for second place.

That fight continued throughout the race, leaving Alvarez free to enjoy an unchallenged victory, his first since the season-opening Brands Hatch round, by 3.424s.

Williams and Maloney ran side-by-side heading into the first corner, but the former held on around the outside to keep the position. The pair continued to run nose-to-tail through the 11-lap race, but Maloney couldn’t quite find a way past.

Arden’s Tommy Foster took fourth, the sixth time he has finished in that position this season, ahead of team-mate Bart Horsten and JHR’s Josh Skelton.

After a poor qualifying, Louie Foster spent most of the race stuck behind Roberto Faria. He tried three times to pass Faria around the outside of Turn 1, but the Fortec driver didn’t put a wheel wrong and held onto take seventh.

Eighth for Foster means he is now just one point ahead of team-mate Alvarez in the fight for second in the standings.

Their battle briefly allowed Alex Connor and Luke Browning, who was disqualified from qualifying after one of his mechanics was seen working on his car when it was supposed to be in parc ferme, to close the gap and make it a four-way fight, but the pair fell away in the closing laps and finished ninth and 10th respectively.