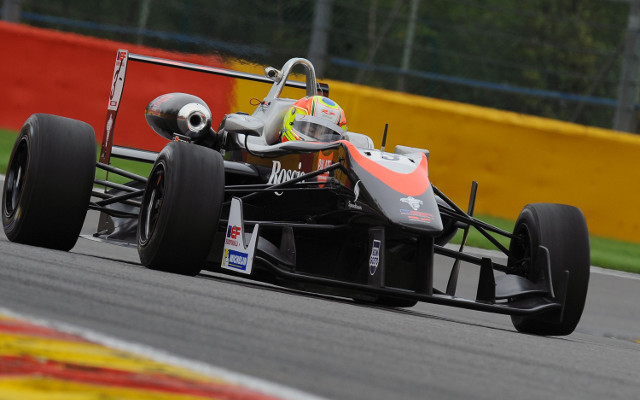 Vitor Baptista took his fourth win of the Euroformula Open season during the first race at Spa-Francorchamps to keep his championship hopes alive.

A slow start from Konstantin Tereshchenko on pole allowed Baptista to overhaul the Russian into turn 1, but he was easily able to get past the Brazilian down the Kemmel straight.

Tanart Sathienthirakul was able to hold onto his third position while Damiano Fioravanti made contact into turn 1 further down in the pack and damaged his front wing.

Sathienthirakul was also able to pass Baptista down the Kemmel straight on?lap two but he was retaken a lap later.

Leonardo Pulcini meanwhile managed to pass the damaged Fioravanti, who then became the leader of a seven car fight for fifth as cars went five-wide down to Blanchimont.

It started to look like Tereshchenko had checked out in the lead, but once Baptista was free of Sathienthirakul, he closed the gap back up to the Campos driver, before making a deceive pass at the end of the Kemmel straight.

Pulcini was able to make up the three-seconds deficit on Sathienthirakul to make an aggressive late-braking pass on the Thai driver into the Bus-Stop chicane.

Behind the group of front runners, Fioravanti in sixth was holding up a lot of drivers with his damaged front wing, but the lack of downforce on the car allowed him to repass any drivers any time there was a straight bit of track. This didn?t last forever as the nose cone eventually gave way on him on penultimate lap and he retired.

After running a lonely fifth for the majority of the race after getting past Fioravanti, Yu Kanamaru caught and passed Sathienthirakul for fourth position.

With Baptista winning and Tereshchenko taking second by only half a second at the finish line, it took another 11 seconds before third place driver and winning rookie Pulcini crossed the line.

He was followed by Kanamaru in fourth, with the Japanese driver’s championship hopes all but over, Sathienthirakul, the second DAV car of Alessio Rovera.