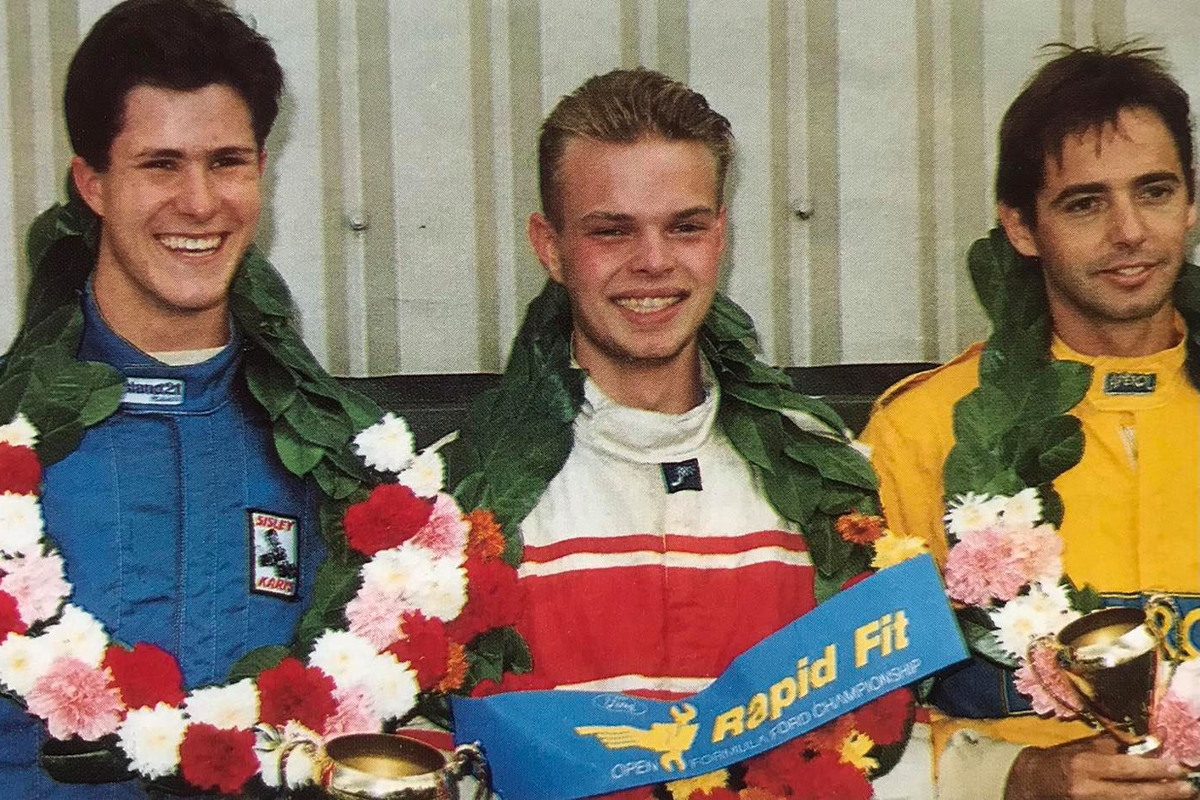 It’s 30 years since one of sport’s most iconic line-ups was formed: Manchester United’s “Class of ’92”. That year also had the last crop of FF1600 graduates before FF1800 took over the FFord scene. And there were some big names

F3’s end officially came in 2021, when the FIA decided Formula Regional series and the BRDC British F3 championship could no longer use the ‘F3’ moniker and the Regional F3 cars were to be homologated as FRegional cars thereon.

BRDC British F3, which had used a heavily upgraded non-FIA Formula 4 chassis as the basis of its car, changed name to GB3 and introduced a new car for 2022 that featured several design influences from F3 cars of old. At the end of this year, the Australian F3 championship came to a demise although that has run for previous-generation cars since its creation in 1999.

There is a hope that one day F3 will come back as a category, with multiple series around the world that feature different chassis and engine combinations. And fans can look to FF1600 as a model of hope as that is also a category that once dominated the world, eventually came to an end, then made a successful return years later.

The first FFord race took place in 1967, and as the wingless category grew in popularity it then gave birth to other Ford-powered single-seater series. FF2000 featured wing cars with 2000cc engines, while the entry-level FFord series used 1600cc Kent engines, then FF1800 came along with 1800cc Zetec engines.

The cars fitted with these engines were faster than the FF1600 machines, and the turning point came in 1993. Winged entry-level series were on the rise, and national FFord championships were switching from FF1600 to FF1800, including Britain. 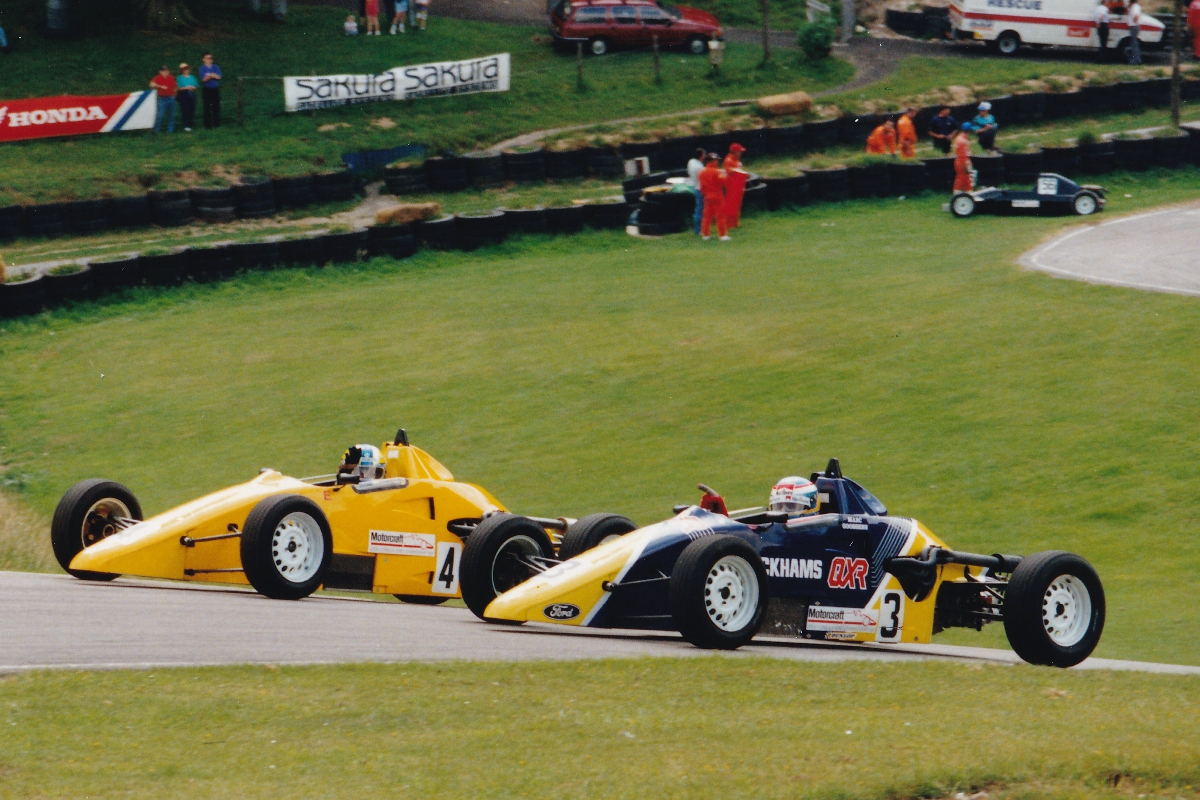 Manufacturers created cars for FF1800 over the next 13 seasons before the top series switched back to FF1600 regulations in 2006 as Ford’s Duratec engine was introduced. New cars have been rolling off the production line every year since, and many countries still have their own national FFord championships.

Jonny Kane won the Irish FFord championship in 1992, a year after being the series’ Junior champion, and he went on to have an incredible career. He was runner-up in the FFord Festival and starred on the continental FFord scene in 1994, before winning titles in Formula Vauxhall Lotus (1995), British F3 (1997) and coming fourth in Indy Lights in 1999.

He then moved on to sportscars and won the Le Mans 24 Hours and twice came second in the Le Mans Series’ LMP2 class, starred in the World Endurance Championship as recently as 2016 and has raced at the top level of GT racing since then.

During 1992 he also won races in British FFord, where Swift’s Jamie Spence was champion [pictured top with Jan Magnussen and Neil Cunningham]. He followed up by winning British F3’s National class in 1993, and stayed in that series until 1998.

Van Diemen’s Belgian ace Vincent Radermecker was the reigning Dutch FF1600 champion and one of the stars of the British championship, winning at Donington Park and Snetterton. He was runner-up in the 1993 EFDA Nations Cup and the 1994 British F3 championship, then switched to touring cars in 1996.

His FFord team-mate was Andrew McAuley, who had been third in the 1991 standings and won the FF1600 class of the FFord Festival in 1993, the first time there had been such a class as FF1800 cars dominated the entry list. 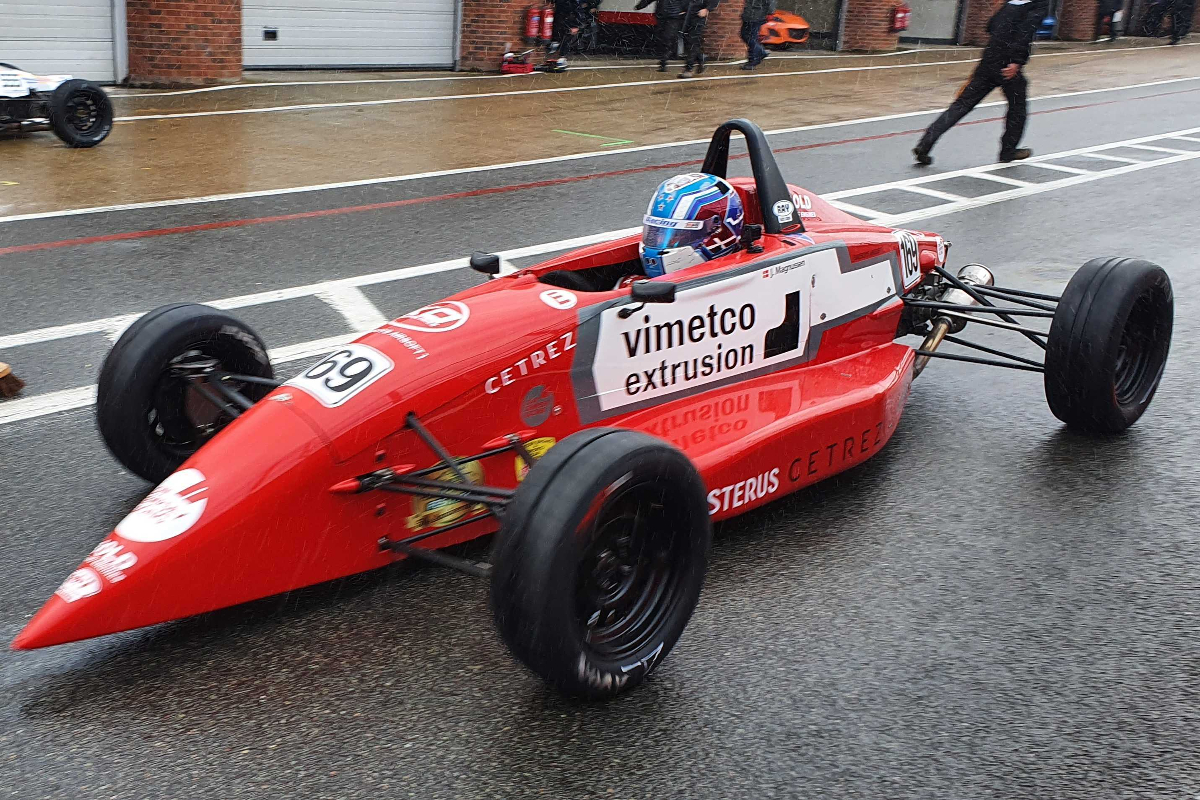 Possibly the most famous driver of all on the ’92 grid was Foundation Racing’s Danish ace Jan Magnussen.

The 19-year-old raced in his home championship in ’91 then came third in Britain the season after. Having won at six of the last nine rounds, Magnussen’s pace was evident and he capped off the year by winning the FFord Festival.

He moved up to the Formula Opel Lotus Euroseries in ’93, finishing fourth, and dominated British F3 in 1994 for Paul Stewart Racing as well as coming third in the Macau Grand Prix. That earned him an F1 test role and a factory touring car seat with Mercedes, and he had made his F1 debut with McLaren before the end of 1995.

A race-winning return to touring cars and a four-round IndyCar campaign in a Mercedes-powered car beckoned before Magnussen could have another shot at F1, but unfortunately he blew it and drove 23 races before losing his seat mid-year.

In 1999 he made a part-time IndyCar return, but closed-wheel racing beckoned and Magussen would go on to win the top GT class of the Le Mans 24H and America’s endurance sportscar championship four times apiece, take three national titles at home across touring cars and sportscars and make himself a valuable signing to teams in both disciplines across the globe to this day. Last year he contested his first FF1600 event in 29 years by returning to the FFord Festival and finishing 11th.

Angel Burgueno was second in the 1991 Spanish FFord championship and faced tougher competition when he moved to Britain for 1992. He did well though, winning at Knockhill in Scotland, and went on to be a Formula Renault frontrunner, raced in F3 then was 1998 Euro Open by Nissan runner-up behind Marc Gene. A varied career in endurance racing followed.

Gene, who finished sixth in Spanish FFord in 1992, would also make the switch to British FFord and was eighth in the Zetec-powered 1993 season and that year’s FFord Festival. Following his Euro Open success, Gene became an F1 driver and made 36 starts across four years with a best finish of fifth. He also won the 2009 Le Mans 24H and was 2008 Le Mans Series runner-up. 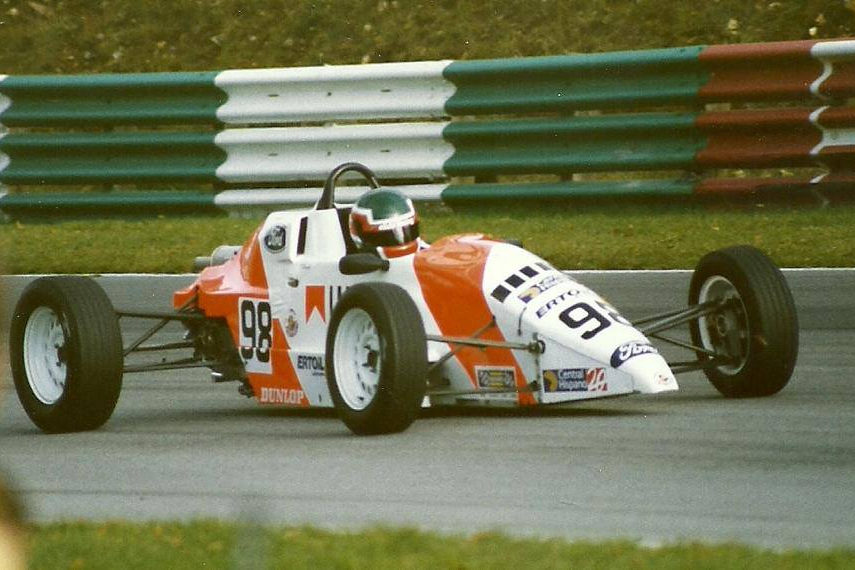 Winner of the 1992 Spanish FFord title was David Bosch [pictured above], whose resume would not go on to match his peers. He won the Spanish FRenault title in 1993, then later reached Euro Open.

Javer Morcillo had a similar path, rising to come second in Spanish FFord in 1993 and in Spanish FRenault three years after, then finishing fourth in Formula Super Toyota Spain in 1998. He kept his racing career going by moving to GTs, where he was a class winner or champion in the lesser-known Acaniz 500km, Jarama 3 Hours, Mugello 12H, Britcar and Spanish GT.

Runner-up to Bosch was Gonzalo Rodriguez. The Uruguayan is one of motorsport’s great lost talents, having lost his life during practice for his second race in CART in 1999. Between those two points, he was third in the Spanish and UK FR2.0 championships, 12th in British F3, fourth in British Formula 2 and then third in the 1998 and ’99 International Formula 3000 seasons.

Rivaling Britain for FF1600 fever is the Antipodean nations, whose FFord championships remain a crucial part of their respective car racing ladders.

The top two in Australian FFord in 1992 were Cameron McConville and Palm Air Racing’s John Blanchard.

McConville went on to win the Australian GT championship’s PC class and the 2002 Bathurst 24H, and came second in the 1998 Australian Supertouring championship. His best season in the Supercars championship was 2005, when he came 10th, although he was Bathurst 1000 runner-up 10 years apart in 1999 and 2009.

FFord watchers may recognise Blanchard’s name because of his more recent history in the category. In addition to being the ’91 and ’92 Australian runner-up, he has entered the Phillip Island Classic event for the past two years.

Craig Lowndes may have only been fifth in the national championship and 10th in the Victorian state series, but when he won the Australian title in ’93 it made people pay attention. Despite reaching F1’s primary feeder series International F3000 with Dr Helmut Marko’s team, his true calling was in Australian Supercars (in the series’ various forms). 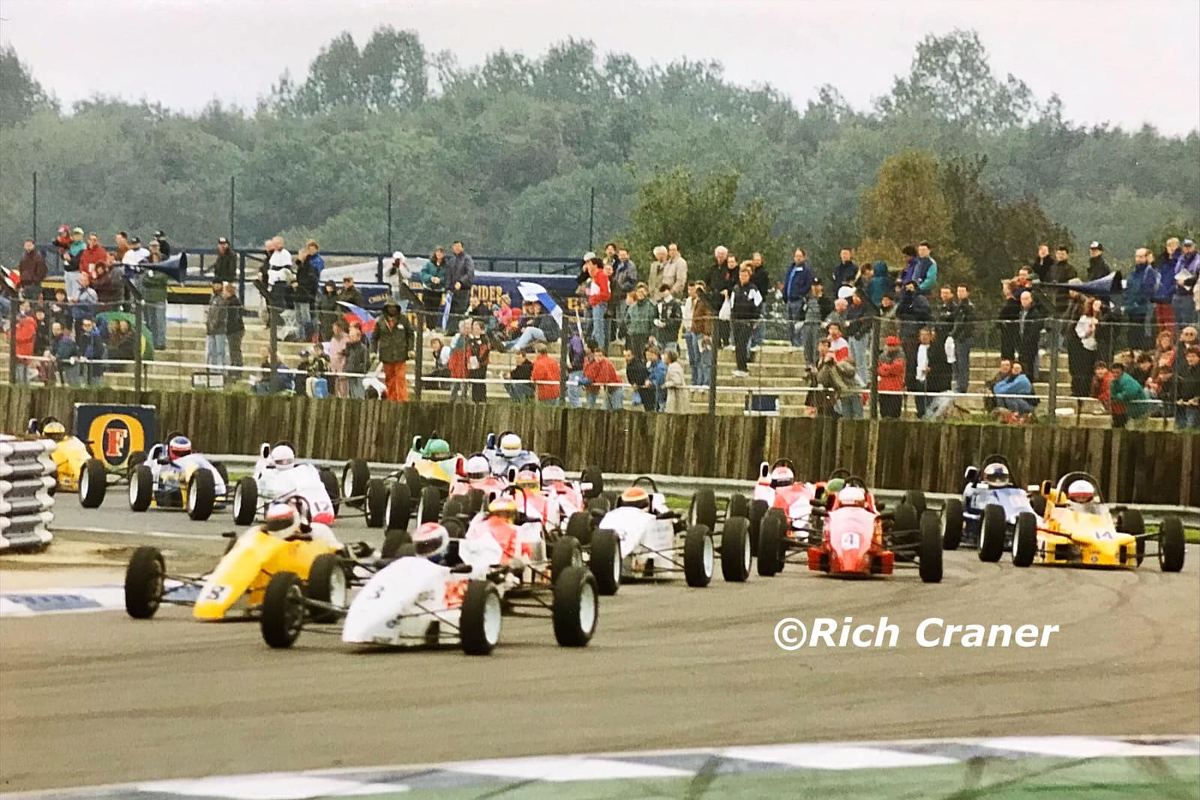 In addition to being champion in 1997, ’98 and ’99, Lowndes won the series’ legendary Bathurst 1000 race seven times. His form at the track continued into sportscars, as he also won the Barthurst 12H thrice.

Stephen Richards shadowed Lowndes in FFord, then won the Australian title in 1994 once his rival had moved on, and is also known for his incredible form around the fearsome Mount Panorama circuit. He has five Bathurst 1000 wins, claimed the 2002 Bathurst 24H and was fourth in the 12-hour race in 2021. In 2014 he also won the Porsche Carrera Cup Australia title.

Several European nations also had national FF1600 series in ’92, and with a varied list of graduates and champions.

Dutch FFord champion Kurt Mollekens won the Masters of F3 race in 1996 and was seventh in Int. F3000 in 1998, then switched to sportscars and was second in Belgium’s Procar series in 1999.

Brian Taulborg was a two-time FFord champion in Denmark as his ’92 FF1600 crown was followed up by the 1995 title in FF2000, while Kalle Jokinen [pictured below] was the winner of the ’91 FF1600 Nordic Champion meeting and the ’92 Finnish championship. That year he also came third in the Scandinavian FF1600 Cup and eighth in the FFord Festival.

Sadly Jokinen died in 2019, aged 47, and his racing career stopped shortly after moving into British FFord in ’93.

However he had an immense career outside of the cockpit, being mechanic to Kimi Raikkonen through his karting career and becoming a very close friend of the future F1 champion. Jokinen described himself as an “older brother” to Raikkonen.

When Jokinen went on to be a mechanic to Heikki Kovalainen, another future F1 racer, Raikkonen then became a mechanic to Polish driver Anna Kowalska in addition to racing himself. He would go on to race, briefly in FF1800.

Nordic FF1600’s ’92 champion Thomas Johansson had a back-to-front career, racing in F3 and then FF1600, and later down the line establishing a career in karting (admittedly on superkarts). 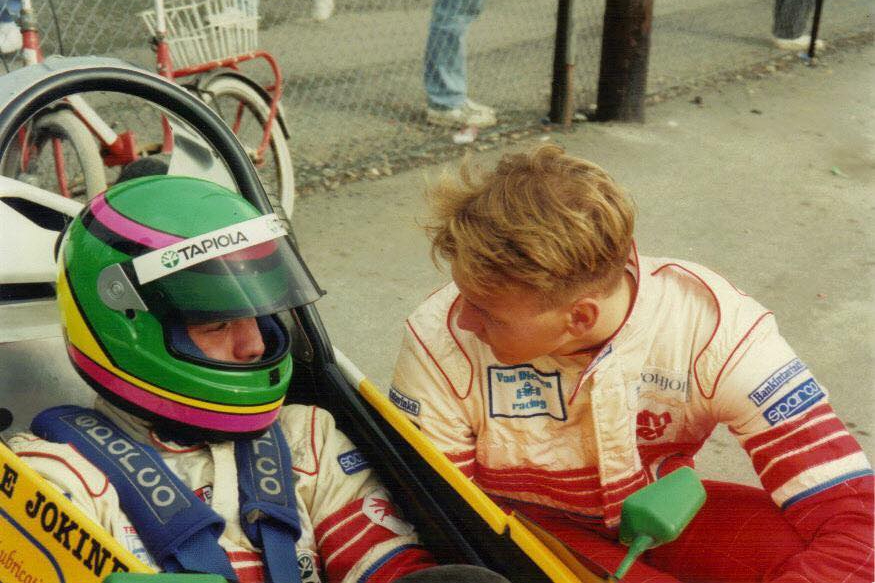 Having finished 20th at the Festival in his title-winning year, Johansson returned to the event in 2017 and ’18 and reached the Last Chance Race both times.

Graff Racing’s Alexandre Janorary was the 1992 French FF1600 champion and came fifth in the Festival, then finished fourth in French F3 in 1994 and ’95.

His rival Jean-Bernard Bouvet succeeded him as champion after coming third in ’92, and the country still had a national championship for FF1600 cars in 1993, then he also progressed to F3. Impressively Bouvet was already racing at the Le Mans 24H while in FFord, finishing 10th in the C2 class of the ’93 edition, and after becoming the 2000 French Super Production champion he returned to sportscars.

He came ninth in the FIA Sportscar Championship’s SR2 class, second in Le Mans’ LMP675 class, fifth in the LMP2 class of the 2004 Le Mans Series, then focused on more amateur series and is now a three-time VdeV Endurance GT champion and an Ultimate Cup Series GT champion.

Wurz was champion and would go on to be Austrian F3 Cup champion, German F3 runner-up, pick up a podium in just his third F1 race and finish eighth in the standings in his rookie season, twice win the Le Mans 24H, help deliver the Intercontinental Le Mans Cup to Peugeot in 2011 by winning the Spa 1000km and Petit Le Mans, and then take three wins for Toyota in the next year’s World Endurance Championship. His son Charlie now races in F4. 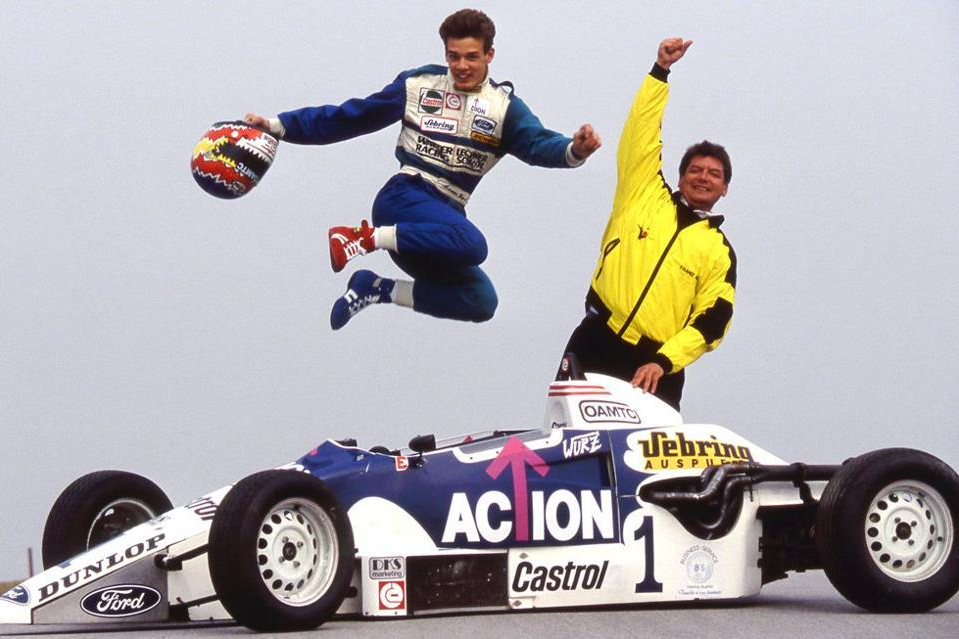 Two more FF1600 champions of 1992 were Frederico Viegas and Jaki Scheckter. Viegas was Portuguese champion, and in 1993 was European FFord champion, fifth at the Festival and sixth in the British championship.

Scheckter, whose father Ian and uncle Jody were both F1 drivers, was born hard of hearing and used hearing aids from his toddler years onwards. That didn’t stop him embarking on a racing career, as he won the South African FF1600 championship and came 16th in the FFord Festival in ’92. He won the Barber Dodge Pro Series in ’95 and was 19th in a part-time Indy Lights campaign in ’96.

He then switched to supporting the IndyCar career of his cousin Tomas, who in return fundraised for Jaki to get cochlear implants in 2005 that meant he didn’t need hearing aids anymore.

Ken Bowes, known for wearing fireproof underwar over his racing overalls, finished fourth in the ’92 FFord Festival and later became an instructor at Silverstone.