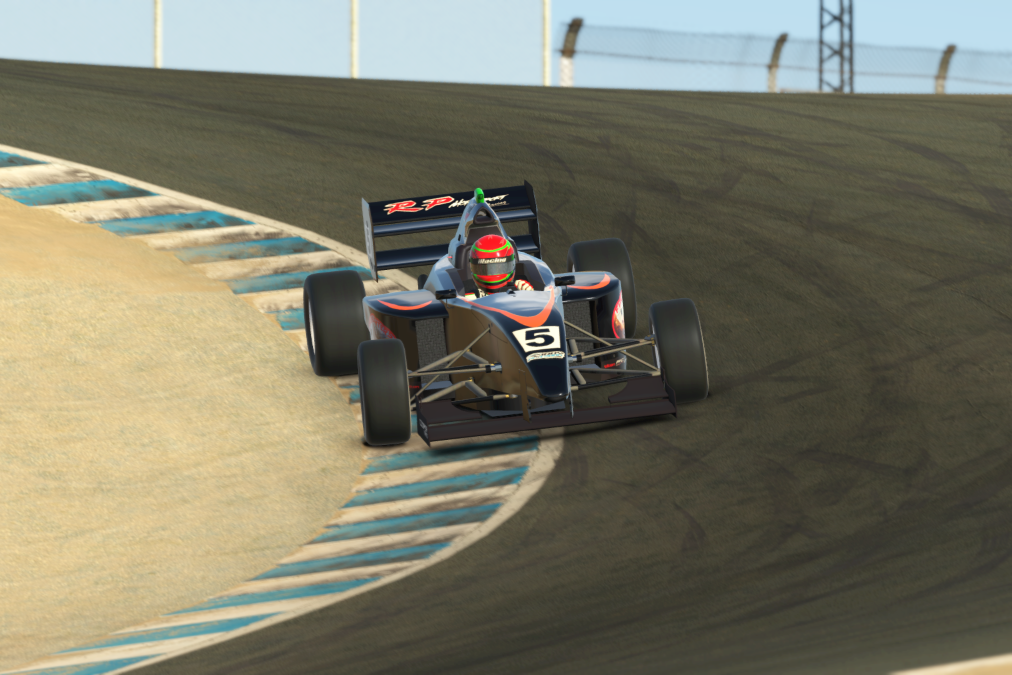 Phillippe Denes controlled proceedings at Laguna Seca in the Road to Indy eSeries on iRacing.

The RP Motorsport driver, who instructs at the track in real life, beat Pabst Racing’s Hunter McElrea to pole in qualifying by 0.133 seconds and never went challenged in the first race of the Esports event.

McElrea was jumped by Exclusive Autosport driver Braden Eves at the start, but regained the position at the end of lap two of 16 when Eves went wide at the exit of the final corner and span.

Denes was untroubled thereon, and opened up a 7.143s lead over McElrea. His second place was briefly under threat, but he was saved by a multi-car fight for third headed by Pabst’s Colin Kaminsky and EA’s Christian Brooks.

A train of cars formed but none attempted a move until Brooks got alongside Kaminsky at Turn 1 on lap 12, then did the same at the final corner. Legacy Autosport’s Andre Castro tried to follow but couldn’t succeed, and he ended up finishing just behind Kaminsky with Andretti Autosport’s Danial Frost on his tail.

Tandon was quick to get in a scrap in race two and fall down the order, and Turn 3 Motorsport’s Comeau led Loomis and Enders at the end of lap one.

Eves and Denes were the fastest drivers on track, and were up to sixth and eighth by lap three. Denes moved back on to Eves’ gearbox on lap four, and was up to sixth by lap five.

At this point Loomis and Enders were riskily swapping second place behind the slower Comeau, and Enders’ third attempt at making a move that would stick ended up bottling up the cars behind and enabling Denes to pass Eves.

There were battles three-wide out of the final corner on lap eight, and Denes was four places ahead of Eves as they crossed the line such was the closeness of the pack. At Turn 2, Denes chose the outside and looked to have claimed second, but Eves kept it three-wide and spun Denes down to eighth.

Comeau still led at the end of the lap, and benefited again when Brooks and Enders passed either side of him then collided as they completed the move. Brooks stopped with damage, while Enders continued in the lead but at a slower pace and now with Loomis and Eves on his tail.

Loomis then span out at the penultimate corner after sitting on Enders’ gearbox, leaving a hampered two-car lead battle with McElrea and Denes closing in.

Denes picked off two cars in a lap as Eves moved into the lead, and he passed his rival at Turn 2 on the last lap to seal a double win. Enders was third, ahead of McElrea, Frost, Comeau and Cape Motorsports’ Kyle Dupell.

The circuits that could come to F1’s rescue