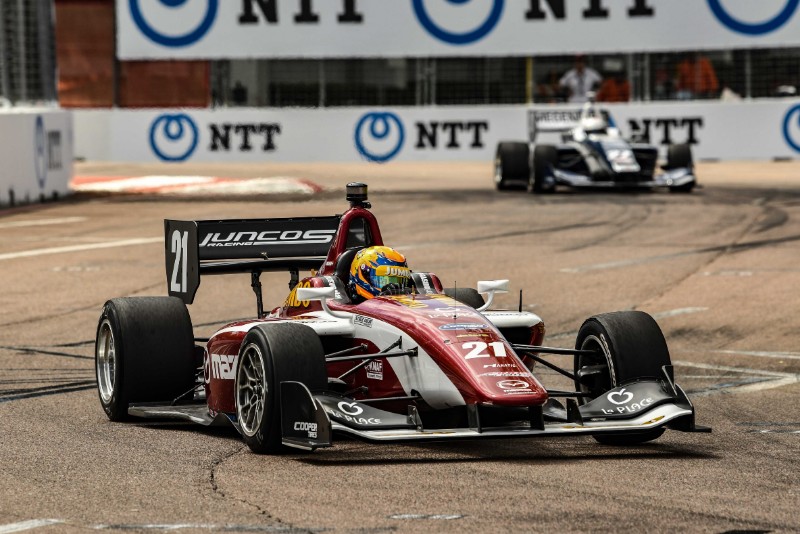 VeeKay passed poleman Oliver Askew around the outside of Turn 1 at the start, but as they came to the next corner the pair made contact, with Askew having to retire and the race being put under caution.

Following the restart, Juncos Racing driver VeeKay pulled away up front and looked assured for the win until a second caution period caused by Askew’s Andretti Autosport team-mate Robert Megennis late in the race.

VeeKay initially jumped away at the front, but DeMelo used push-to-pass to close back in and finished just 0.0328 seconds behind.

After clearing BN Racing team-mate David Malukas, Englishman Toby Sowery applied pressure on DeMelo before the second caution period but then dropped back on the last lap to take his second podium from two starts.

Benefitting from both of the race’s retirements was Belardi’s Julien Falchero, who finished just behind Malukas in fifth. It was the Frenchman’s first top five finish since the GP3 sprint race at Spa-Francorchamps in 2017 and only the second outside of his race-winning VdeV Challenge campaign in 2015.

Ryan Norman was the only Andretti finisher in sixth, ahead of Belardi’s Lucas Kohl and Juncos’s Dalton Kellett.

Megennis had run as high as second, and was in fifth place when he carried too much speed into Turn 10 and ended up in the wall.