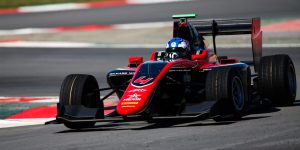 Hughes, who returns to GP3 in 2018 after competing in European Formula 3 last season, was fourth on the timesheet heading into the final moments of the session. His last lap was a 1m32.908s benchmark, 0.4 seconds clear at the top of the times.

Hubert, who was announced as a Renault Sport affiliated driver this morning, had reached top spot with his first representative lap of the session. Having reduced his personal best by 0.3s on the next lap, he had dominated first place prior to Hughes’ late lap. While Hubert also improved on his final lap, he stayed second.

Third on the timesheet was Campos Racing’s Leonardo Pulcini. His final lap was a huge?improvement on his previous personal best, but 0.5s off of Hughes.

GP3 newcomer Nikita Mazepin was the third ART on the timesheet, finishing fourth. Dorian Boccolacci had been bottom of the timing screens for a large portion of the session but eventually climbed to fifth for new team MP Motorsport.

Sauber Formula 1 reserve driver Tatianna Calderon finished sixth. She had stopped on track at Turn 11 early in the session but continued. GP3 rookies Pedro Piquet and Gabriel Aubry were seventh and eighth respectively.

Niko Kari was one of the first to post his final lap of the session, initially vaulting to third before sliding to an eventual ninth. His MP Motorsport team-mate David Beckmann was 10th.

Callum Ilott was the slowest ART in 11th place, 0.9s behind his team-mate Hughes. Guiliano Alesi was 12th for Trident and suffered a spin on the exit of Turn 13 midway through the 45-minute session.