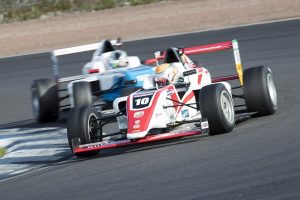 SMP Racing driver Belov has been the pace-setter in the second half of the season, and was second fastest in first qualifying to team-mate Ivan Berets. In the race the result went the other way, with Belov dominating and MP Motorsport drivers Amaury Cordeel and Isac Blomqvist completing the podium.

Berets ended the race in seventh, half a minute off the winner, but still did better than championship leader Lappalainen, who finished three laps down for?Kart In Club Driving Academy.

Belov started the second race from the front, but this time it was hit turn to suffer and Cordeel came through from fifth on the grid to beat Lappalainen to victory. Belov finished behind Berets in fourth, meaning 23 points separated the top two going into the final race.

Things got worse for Belov as he failed to set a lap in second qualifying, with Lappalainen lined up in fifth. Berets took pole, and he went on to take his second win of the season. Lappalainen stormed through to second, while Belov’s title hopes disappeared with a retirement.

The Japanese F4 title battle got closer at Autopolis, but it was OTG driver Togo Suganami who was the star of the weekend.

Having previously done no better than third, he took two spirited victories and is now fifth in the standings. Championship leader Yuki Tsunoda, who had missed the podium just once prior, had a terrible weekend with eighth and 11th place finishes.

His chief title rival and Honda Formula Dream Project team-mate Teppei Natori finished both races in third, behind TOM’S driver Kazuto Kotaka. The three are now split by 29 points, with 50 available in the final round at Motegi.

HFDP’s Takuya Otaki continued his strong end to the season with a fifth and a fourth, while Mizuki Ishizaka of Bionic Jack Racing achieved his best result with fifth in race two.