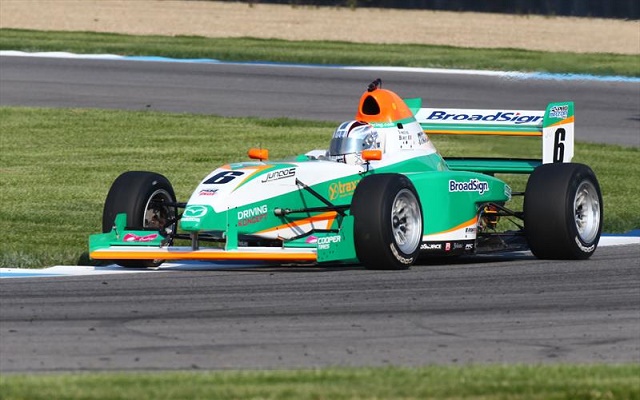 A landmark Indianapolis weekend for Juncos Racing continued in style as French rookie?Timoth? Buret took his first Pro Mazda Championship victory in the second race of a three-race slate.

Buret led the field to the green flag, but starting right behind him was?Florian Latorre, the reigning USF2000 champion, who looked to put his colossal Thursday rollover behind him.

Latorre made an incisive start and dove to the lead briefly in the first corner but Buret was able to take first place back.

The first and only full-course yellow then flew as Expert class drivers?Carlos Conde and Kevin Davis had collided at the back of the field.

Victor Franzoni, who moved up to Pro Mazda from USF2000 this weekend with M1 Racing, had jumped up three places from his ninth grid position over the first lap.

After the restart, Franzoni then passed?Will Owen for fifth place, one lap after?Weiron Tan?made the move on Owen to get up to fourth, behind the lead group of Buret, Latorre, and Urrutia – all covered by less than one second.

As the lead four controlled the race ahead of the field, points leader?Neil Alberico endured an abysmal run that saw him off track in the final ten minutes and finishing 17th.

Franzoni, in fifth, came under pressure from Juncos Racing teammates?Garett Grist?and Owen with three laps to go. Grist made his move into turn 8 on lap 19, but then locked the brakes allowing the Brazilian to keep fifth. Grist and Owen then continued to battle each other, but a slide by Owen allowed their teammate?Jose Gutierrez to move past into 7th.

In the end, it was all green for Buret, who resisted the pressure to secure his first Pro Mazda victory, ahead of Latorre whose sensational recovery drive nets him 2nd. Urrutia finished 3rd and moved past the struggling Alberico for the championship lead, ahead of Tan and the debuting Franzoni who rounded out the top five.

Grist, Gutierrez, and Owen finished 6th, 7th and 8th for Juncos, ahead of?Daniel Burkett in ninth and?Pato O’Ward in tenth.?Bobby Eberle was the highest-placed Expert Class driver in 18th overall.